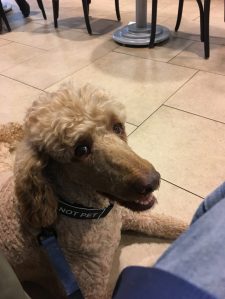 I’m fortunate to have a wonderful wife, children who keep getting smarter, wiser, and better-looking every day, and an awesome collection of friends and acquaintances that keep my life interesting and engaging. However, it takes a dog to help put my good fortune into perspective. For sheer unwavering dedication and devotion, not much is better than a good dog, and Izzy is among the best.

Don’t get me wrong – I know she’s a dog. We don’t have long soulful discussions about important issues. I prefer Amy’s company, especially for conversation, although I can’t say Amy always feels the same way. However, for those times when the people I love are either not available or are fed up with me, it’s nice to have Izzy sitting on the couch next to me or on the floor at the foot of the bed, either watching my every move or snoring loudly.

Isobel is her actual name, but she thinks she’s in trouble if you call her that, so we generally stick to Izzy or Iz. Amy calls her Skizz, but Amy often calls me things that are not on my birth certificate either, and I think Izzy got a better deal than I sometimes do. She came to us about three years ago from a wonderful breeder in Montana, and she’s nine now, just past middle age for a dog of her breed (standard poodle) and impeccable background (royalty, no doubt).

We got her specifically to be a companion for me (I could swear I overheard Amy telling someone on the phone that we decided to get a dog so I would “have someone to play with,” but I might have dreamed that). I had owned dogs before, but they were never really mine, nor was I theirs. I never imagined how tight the bond could be. So tight, as a matter of fact, that Izzy doesn’t have much use for people other than me. She generally ignores other people unless they take any of my time and attention; then, she sulks until they go away. She always has a wag, a wiggle, or a smile for me, though (if you think dogs don’t smile, you don’t know dogs).

Too much of anything, even a good thing, can cause problems. Izzy has always been a little apprehensive if I’m not around, but she began to dart out the front door to look for me when I was away, and she wouldn’t come when Amy called her. That was unacceptable from a number of perspectives. There can only be one alpha in the house when I’m not there, and it isn’t Izzy. (I’m grateful that Izzy doesn’t know that there’s only one alpha in the house, and it’s the same one whether I’m home or not, but I digress). Clearly, remedial training was necessary.

I found an experienced and highly recommended trainer, and we went to work, first on me, and then on Izzy and me together. Apparently, behavior issues with dogs are usually caused by inept humans. After I worked on becoming less inept, we began to focus on Izzy. She is a much better dog than I am a human, and was easy to train. As she learned, her confidence increased, and although she still prefers to be around me (who wouldn’t, after all?), she can stand my occasional absence.

In a conversation with the trainer before a session, the subject of my Parkinson’s disease came up. We talked about service dogs for PD patients, and I told the trainer that I had considered trying to get a service dog a couple of years ago, but that I just couldn’t do that to Izzy.

She said, “You know, Izzy has just the right temperament for service, and it’s clear that she’s bonded to you in a way that most dog handlers would envy. It’s a matter of teaching her the right behaviors to help you with your PD, and it’s certainly possible to do.”

I was encouraged by her optimism. I had considered trying to teach Izzy myself not long after she came to live with us, but I didn’t have either the expertise or experience. And, Amy and I both (okay, mostly Amy) were concerned about being lumped in with the “service dog scammer” bunch, who claim that Fifi the chihuahua-pit bull mix is a service dog, just so they can take her into restaurants, on airplanes, and into other locations that pets aren’t allowed, but service dogs are. That reprehensible behavior makes business owners justifiably suspicious, and puts people who have a justifiable need for their service dogs at a serious disadvantage.

After I had done research to verify for myself that it was a legitimate approach, Iz and I began to work with the trainer to add PD support behaviors to Izzy’s obedience behaviors. Izzy is a very smart girl, and in short order she added a collection of useful abilities to her bag of tricks.

If I fall (it happens more often than it used to, unfortunately), she comes to me, and sits attentively. I can give her the command “brace,” and she stands up and allows me to use her collar and back as support to get up again. She’s always been good at walking with me, and she helps steady me as I go up stairs. She can fetch an ever-growing list of items for me (although I sometimes have to send her back, reminding her that “cane” and socks” are different words). We’re still working on driving and responding to email, but I have confidence in her, as smart as she is. I’m not sure she’s ever going to be able to “fetch dinner,” though. She keeps coming back with an empty plate.

I am very fortunate that she possessed so many of the characteristics that make a good service dog: intelligence, dedication, calmness, focus, and a willing spirit. We’re all better off; Amy doesn’t worry as much when I’m out, I feel better knowing that Izzy can help me when I need her to, and Izzy gets to do her “happy dance” more often. She loves to hear me say, “Izzy, it’s time to go-go-go!” She spins in circles and prances at the front door until I finally find her leash, and then sits and waits attentively until I clip it on and we’re ready.

In the past, she would push out the front door as soon as I opened it, eager to go-go-go. Now she waits until I command, “with me,” and then she follows me out the door. She’s working, and I think she knows it. I’m proud of her, and I think she’s a little proud of herself. 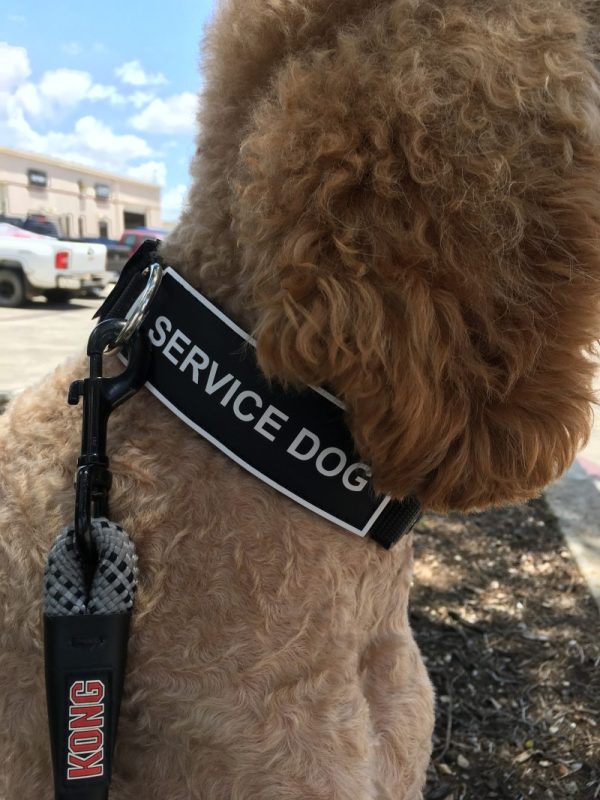 Follow The Crooked Path on WordPress.com
Join 730 other subscribers